BB-8 Droid Star Wars cake made out of a cantaloupe and dressed in buttercream icing and almond paste. A droid that is deceptively really a beautiful fruit yet surprisingly a big hit at birthday parties! The kids won't even miss the cake! Wow, how on earth would one ever create a cake that looks like the almighty popular movie Star Wars BB-8 droid character? Totally exactly what I thought when my 5-year old asked for a BB-8 cake. Me of course (trying to be an ultra healthy mama) asked about making BB-8 out of watermelon, like a watermelon cake. Chase said his favorite is cantaloupe  and wants his Star Wars cake made out of a cantaloupe... no questions asked. In this case it turned into two cantaloupes.

Weeks before Chase's 5th Star Wars Birthday Party I kept asking if he really still wanted a star wars cake made out of a cantaloupe. Like there really is no fluffy carbohydrates involved... just fruit when you slice into the "cake"! He was totally stoked and kept repeating that he wanted his cake made like this.

It was low key but for a child it was a STAR WARS extravaganza that was mind blowing!!!! The invitation suggested celebrating with Padawans, Jedi Knights, X-Wings, Light-sabers, The Force, Light Speed, and a special appearance BB-8 Droid cake ready to be devoured! Come dressed as a STAR WARS character if desired.

...Nobody came dressed, not even my child. But we did have fun masks!

The Force was still with us all even up until the Star Wars cake! 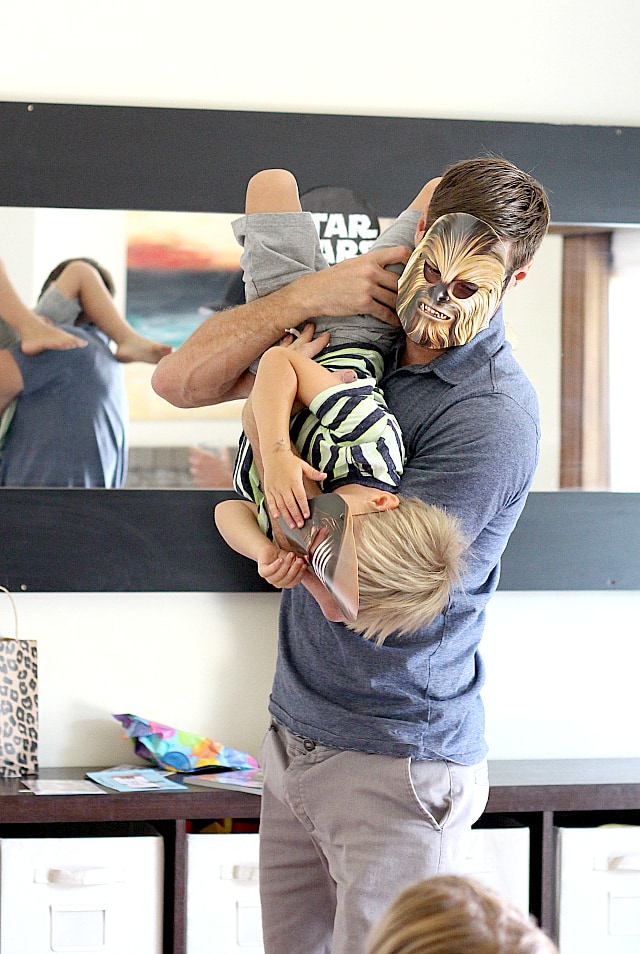 Star Wars is just one of those movies that if you are born in the 80's like me just grew up loving! So now that my husband and I have children we have so excited for the day to introduce the boys to it. I hopped on Amazon and got all the party favors including Star Wars balloons and mini Lego Light-sabers. Hubby and I blew up balloon and they were all over the hallway and in Chase's room so when he woke up on his birthday it was the start to a mega Star Wars Surprise Day (in his mind- Best. Day. Ever!!!)! 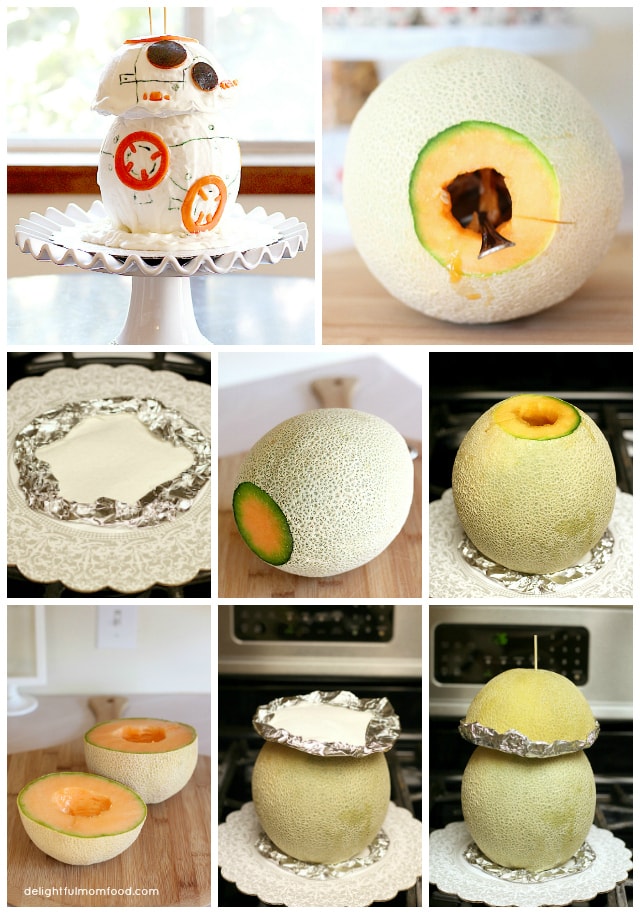 Ok, here's the details if your boys are like mine and want everything surrounding them Star Wars....

Or if you are mega healthy control freak like me and open to trying something new like a cantaloupe cake...

How to make a STAR WARS CAKE or Cantaloupe BB-8 Cake: 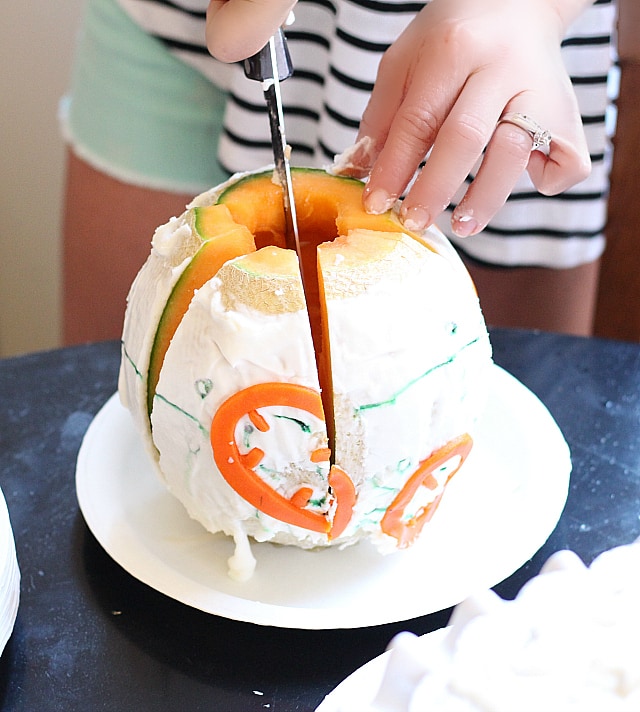 To our surprise all the kids at the party loved it! I think because they got to eat tons of sugar off the icing. And for the birthday boy, his favorite is cantaloupe these days so he was totally stoked to have a fruit cake instead of breads and carbohydrates. Hope you enjoy this fun new way to use a cantaloupe and make an outrageous cantaloupe fruit cake or Star Wars cake! 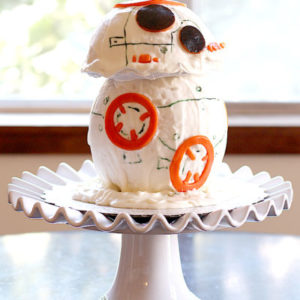 Danielle Fahrenkrug
BB-8 Droid Star Wars cake made out of a cantaloupe and dressed in buttercream icing and almond paste. A droid that is deceptively really a beautiful fruit yet surprisingly a big hit at birthday parties! The kids won't even miss the cake!
No ratings yet
Print Recipe
Prep Time 45 mins
Total Time 45 mins
Course Dessert
Servings 12

Danielle Fahrenkrug is an entrepreneur, self taught chef, and food photographer turned 3x cookbook author. Her passions of helping others with healthy eating led her to becoming a certified health and nutritional life coach. She is also a wife, mother of four, and loves the beach, animals, and fitness.

Hi, I'm Danielle! I'm an entrepreneur, self taught chef, and food photographer turned 3x cookbook author. I am passionate about helping others with healthy eating which led me to becoming a certified health and nutrition life coach and always creating new healthy recipes here for you!

At no additional cost to you, as an Amazon Associate I earn from qualifying purchases.

The statements on this website have not been evaluated by the food and drug administration. This is not intended to diagnose, treat, cure, or prevent any disease. Always consult with a doctor first before starting any new diet plan or routine.